Biochemist Jennifer Doudna, the winner of the 2020 Nobel Prize in Chemistry, will deliver the John A. and Betty C. Moore Science as a Way of Knowing public lecture at UC Riverside on Feb. 3.

Her talk, which will be a live webinar at 4 p.m., is also part of the Chancellor’s Distinguished Lecture Series at UCR. Titled “A CRISPR View of the Genome and Genome Editing,” the lecture is free and open to the public. 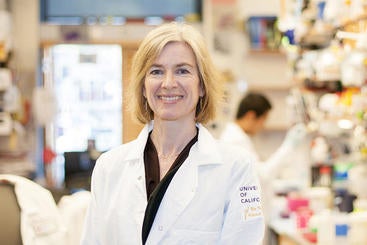 A professor of molecular and cell biology at UC Berkeley, Doudna and her colleague Emmanuelle Charpentier, director of the Max Planck Institute for Infection Biology, were recognized by the Nobel Foundation for their landmark genome editing breakthrough that has revolutionized biomedicine.

The development of CRISPR-Cas9 as a gene-editing tool allows scientists to rewrite DNA, including in human cells, opening up a wide range of possibilities across biology, agriculture, and medicine.

Doudna is a perfect fit for the Science as a Way of Knowing series, which spotlights researchers in the life sciences noted for their achievements and ability to explain their work to the greater public, said UCR biology professor Richard Cardullo, faculty director of University Honors and co-organizer of the lecture series.

“The whole CRISPR development totally changes the way we think of certain therapies,” he said. “To be able to manipulate genomes, particularly to make genetic changes in the cells and tissues of embryos and adults to cure genetic diseases is a tremendous leap.”

Cardullo has long sought Doudna for the series before her Nobel win, noting that her contributions over the decade were immediately recognized as groundbreaking. She’s been a highly in-demand speaker but was very gracious and delighted to be invited, he said.

“A major part of this series is trying to get people to understand the beauty of science,” Cardullo said. “Doudna is very engaging. She’s clearly very passionate about her work, both in biology and the potential greater application.”

Doudna is the Li Ka Shing Chancellor’s Chair in Biomedical and Health Sciences and a Howard Hughes Medical Institute investigator at UC Berkeley, president and chair of the board of the Innovative Genomics Institute (IGI), a faculty scientist at Lawrence Berkeley National Laboratory (Berkeley Lab), a senior investigator at the Gladstone Institutes, and an adjunct professor of cellular and molecular pharmacology at UC San Francisco.

The John A. and Betty C. Moore Science as a Way of Knowing lecture series was established in 1997 to bring outstanding scientists to campus who are especially recognized for their contributions to society and especially to science education. John Moore was a professor in the Department of Biology from 1969 until his death in 2002. He was widely recognized for his contributions to the teaching of science. He authored “Science as a Way of Knowing,” the seven-volume series still used by scientists around the world for teaching from the high school to the graduate school level.

Register here for the lecture.

UCR to appear on “The College Tour” television series