UC Riverside’s Student Success Center reached an important milestone Friday, Nov. 6 as construction crews placed the top beam on the new building that is less than a year from completion.

A small ceremony was held to mark the occasion with construction workers and a few campus community members signing their names to the steel beam before a crane lifted it to the top of the structure.

With a seating capacity of 1,100, the new building will provide a significant increase in classroom space to meet the growing campus enrollment and graduation rates in coming years.

In a video celebrating the topping-out ceremony, Chancellor Kim A. Wilcox described the progress as a great moment for the campus. He said the project represents UCR’s long-standing values of education and student growth. 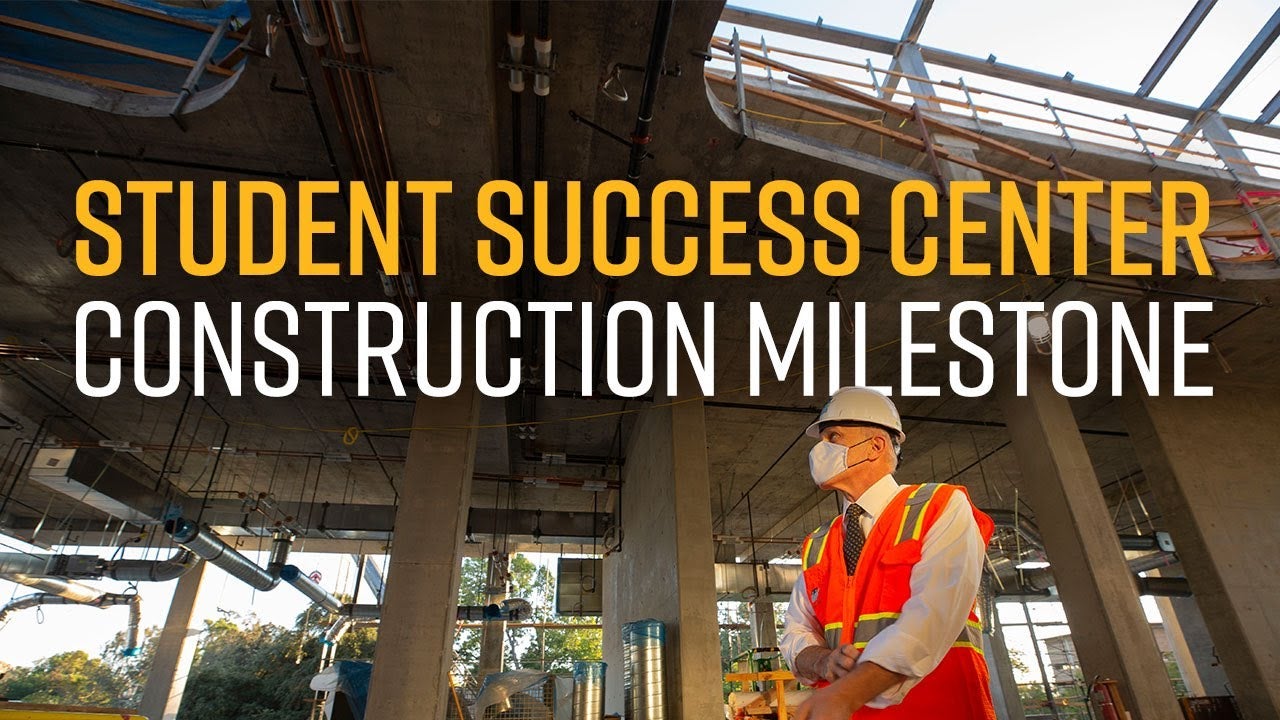 “I’m looking forward to having everybody back on campus as soon as this pandemic is over so we can all be in the building and enjoy a brand-new classroom building,” he said.

The project began construction in late 2019 and is expected to be completed by August 2021, said Mihai Gavan, a project manager with the Office of Planning, Design and Construction.

The .8-acre lawn area south of the CHASS Interdisciplinary building and west of the Student Services building has been fenced off as work began with site preparation and underground utility replacement and installation.

Much of the concrete and steel frame has taken shape over the last several months, when most of the campus community has been away due to the coronavirus.

“I believe once the students, faculty, and staff start returning to campus they will be very impressed with this building at the intersection of the Ars Mall and Carillon Mall,” Gavan said. “It’s very dramatic as you see it appearing from behind the trees as you approach from the Barn or the Arts building.”

Tomasso Menara, a fifth-year doctoral student in mechanical engineering, has been watching the project’s progress from renderings to construction as the chair of the Highlander Union Governing Board, which contributed funds to the project budget.

“It’s really emotional,” he said at the topping-out ceremony. “I really hope this is going to be the new pulsating heart of the campus.”

The next steps of the project include installing the sloped atrium roof, adding metal and glass panels as part of the exterior building enclosure, and completing the interior work for the classrooms, lecture halls and other rooms, Gavan said. Mechanical, electrical, plumbing, and fire sprinkler installation are also in progress.

The building includes a 400-seat in-the-round lecture hall that will be unlike any classroom on campus. Work is currently underway to frame the ceiling and projection surface for screens that will project images.  Crews will also soon begin building the tiered seating platform for the hall, Gavan said.

Brendan O’Brien, director of the HUB, said the building will be unique on campus in combining academic programs and student activities.

“It’s going to have some liveliness and vitality that’s exciting to see,” he said.