Live music is returning to the Barn.

For decades, the UC Riverside venue has been a thriving center of the region’s music scene, hosting acts from Van Morrison to No Doubt to Rage Against the Machine.

That tradition will continue at the new outdoor stage at the expanded and renovated facility, which is hosting its first music performance in seven years on Thursday, March 17 as part of a St. Patrick’s Day Happy Hour from 4-8 p.m. Themed food and drinks, including Guinness and green beer, will be available for purchase. 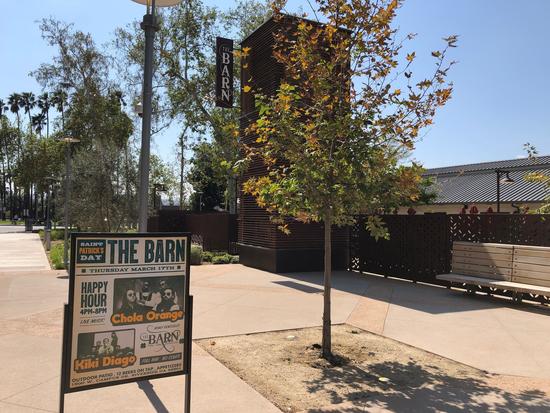 In the fall, the Barn hopes to begin regular ticketed events on Friday and Saturday nights, featuring mostly local and regional acts. And at least once a quarter, it hopes to feature a headliner who wouldn’t normally play in a smaller venue such as the Barn, which has a 500-person capacity for the outdoor stage. Students would be able to purchase discounted tickets.

Plans for the summer are still being determined.

“Everybody is really excited to have live music back at the Barn,” he said. “Everybody’s been waiting.”
Mirandé was first contacted in late 2019 to book acts for the Barn as the renovation and expansion project was nearing its completion. The Barn reopened in May 2020, just as the pandemic began. As a result, plans for music were put on hold.

Discussions to book acts resumed late last year but were pushed back due to the Omicron variant. As conditions improved, the campus reached out to Mirandé in early February to organize the St. Patrick’s Day event.

As a concert goer who attended punk shows at the Barn in the 90s and played there in his own band, Mirandé sees this as a new beginning for the storied venue. He hopes to draw an eclectic line-up of artists from rock, hip hop, Latin, electronic, and other genres.

“I want this to be as inclusive as possible to students, staff, faculty and the larger Riverside community,” Mirandé said. “I want to facilitate what people want to see.”

The Barn Patio and Barn Stable are open Monday through Friday from 4 p.m. to 8 p.m. Visit the Barn website or follow its Facebook page for updates.