There was a time when Brain Awareness Day, which takes place each April, was just about the only outreach activity of the UC Riverside Neuroscience Graduate Students Association, or NGSA. But that changed when second-year graduate student David Nikom came to UCR in September 2020 from the University of Massachusetts Amherst after receiving his undergraduate degree in neuroscience.

Today, Nikom is the outreach chair of the NGSA. Outreach sessions typically include hands-on interactive activities and demonstrations — many of which Nikom initiated — that take place in local Riverside schools and camps held several times a year on the UCR campus.

“One popular activity for kids aged 7 through 15 is sheep brain dissections,” said Nikom, who works in the lab of Sika Zheng, an associate professor of biomedical sciences in the School of Medicine. “We hand out gloves, goggles, scalpels, and guides to our young visitors. They get a whole sheep brain to work on. We discuss comparative neuroanatomy and ask why it’s important to look at brains in general, how there is so much complexity under the surface. We make sure the students have goggles on and don’t touch the brains without gloves. Most of them need to be taught how hold the scalpel.”

Invariably, the visitors are excited and amazed to see a brain up-close, hold, and dissect it. Questions the NGSA explores with the kids in this activity include: What about the brain makes you smarter? Is it how wrinkled it is? Is it its size? How do our brains make us special among animals? In turn, Nikom and his fellow NGSA volunteers get bombarded with questions from the visiting students: That used to be in a real sheep? Did you kill the sheep? Where is the rest of it?

Since January 2021, the camps have attracted about 500 participants, not including over 100 visitors to the Brain Awareness Day activities on campus. By the end of this summer, Nikom expects the outreach activities will have drawn at least 1,000 visitors.

In its outreach activities, the NGSA also has interactive Backyard Brains electrophysiology demonstrations where kids can record electromyography signals produced by flexing their muscles. A discussion on how neuro-prosthetics work soon follows.

“The students get to control a robotic claw just by flexing their muscles,” Nikom said. “We also have a human-human interface, where you control someone else’s muscles by flexing your own. The kids really love that.”

In 2005, when Nikom was 10 years old, a pivotal experience steered him toward neuroscience. His parents signed him up for a brain camp at a local middle school in a suburb of Boston, where a science-passionate teacher explained to him the mysteries of the brain.

“I remember hearing about electrodes being implanted in a stroke patient’s brain, which let them move a computer cursor around a screen,” Nikom said. “I was blown away by this experience. Afterwards, whenever I had to pick a topic to write for a paper, I’d choose neuroscience.” 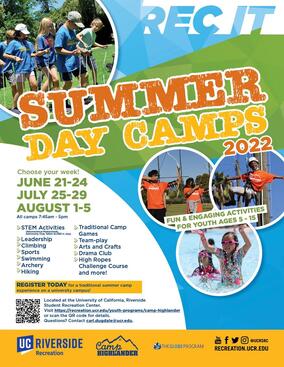 When he joined UCR in 2020, Nikom found such activities were missing in the NGSA outreach efforts and took it upon himself to introduce them in the programs. In the height of the COVID-19 pandemic, he launched the outreach program Neuroscience Masterminds and developed a number of virtual interactive activities. Nikom also partnered with Camp Highlander, a traditional summer camp held at the Student Recreation Center, or SRC, on campus.

“When I reached out to Carl Dugdale at the SRC, he indicated there was a massive need and demand for science, technology, engineering, and mathematics — or STEM — outreach,” Nikom said. “We agreed I would develop the neuroscience content and run the sessions, and Carl would help with registration and spreading the word about our outreach efforts to families.”

Dugdale, the youth programs coordinator at the SRC since 2018, has long been interested in finding a balance between traditional youth programs and academics.

“At Camp Highlander, we have always aimed to have STEM elements,” he said. “We want to get youth excited about higher learning and entering college. We had already worked with the departments of physics and astronomy, entomology, and botany and plant sciences on campus. Partnering with the NGSA was a natural fit.”

The summer day camps at the SRC this year will take place over three weeks — June 21-25, July 25-29, and August 1-5 — and will include several NGSA outreach activities. How to register.

These days, the Neuroscience Masterminds team includes other dedicated UCR neuroscience graduate students who design and run the outreach sessions. Nikom recruited students from his cohort to form the group, whose core is comprised of six graduate students, each of whom believes outreach is important in demonstrating to young minds how fun science can be outside the classroom.

“Often, when students leave middle school and begin high school, they get disillusioned or discouraged from science, thinking they are not math- or science-prone,” Nikom said. “But all it takes is a moment for you to realize that something like the brain can be interesting and knowledge about it is accessible. It shows young students that science is everywhere and enjoyable, and just because it may be complicated, just because it’s neuroscience, it doesn’t mean you cannot do it or that you have to be a genius.”

“Outreach is very rewarding, and it is fun to be working with kids and to get them excited,” said Kokash, who graduated with her doctoral degree in neuroscience this summer and was awarded a UC President’s Pre-Professoriate Fellowship last year. “But beyond having fun, it trains you to be a more effective science communicator. It gives you experience in communicating challenging and high-level concepts in neuroanatomy to an audience that has never heard these things. It teaches us to work with groups of different audiences and people of different backgrounds, offering, in the end, a broad perspective on what it means to be a scientist.”

Kokash joined UCR as a graduate student in 2016 and worked in the lab of Khaleel Razak, a professor of psychology. As president, she organized multiple Brain Awareness Days, which UCR first celebrated in 2011, ensuring the events ran smoothly.

“For us graduate students, training is not just academic training but also community and social professional development,” she said. “Brain Awareness Day brings us together — faculty, students, and staff — as a neuroscience community. If first-year graduate students want to get involved with the NGSA, they can participate easily on Brain Awareness Day at different levels of outreach.”

Not surprisingly, the feedback the NGSA has received on its outreach activities has been overwhelmingly positive.

“We have kids who come back multiple times,” Nikom said. “They attend different sessions or the same session twice. We have received good feedback from parents, too. One father told us that when he picked up his daughter from camp, she was smelling of formaldehyde but that mattered little because, to his delight, she was raving about how she got to touch a sheep brain and study its structure.”

Such feedback from parents keeps Nikom and the others in Masterminds driven to continue engaging in NGSA outreach. But parents are not the only ones to recognize NGSA’s outreach efforts: The association received the 2021-2022 Outstanding Commitment to Higher Education Outreach Award this month from UCR Student Life in recognition of its outreach efforts.

“It’s a challenge, privilege, and a rewarding experience to study and communicate about the brain,” Nikom said. “There’s a critical age when kids can be inspired to science — typically, when they are in fourth to seventh grades. If the NGSA can inspire even one child to become a neuroscientist, all our time and effort would be worth it.”

Local high school teachers get up to date with physics